Marc Stockman was born into a working-class family and at the early age of nine found what the driving force in his life was to be: painting.

In this unpretentious, down-to-earth Flemish milieu of painters, he saw his father dedicate his free time to reproducing the work of the Impressionists.

A lively curiosity, coupled with a solitary nature, meant a penchant for long hours of creative activity, together with a sense of being different.

This feeling developed into a strong inner ambition and spirit which translated itself in a real need to be painting.

Still only 14, he starts working with a tiles craftsman of the Delft tradition. He also mingles with the artistic circles of his birthplace, where his own work develops from early surrealism to acquire clear expressionist tendencies.

1955: Moves to Paris to enter the Beaux Arts, only to leave two weeks later in indignation at the general dismissive attitude to Rubens, whose earthy exuberance was considered bawdy and undignified.

His move to Paris represents a radical turning-point in his intellectual life.

His expressionism, with its own Flemish slant, forges close links both with Rouault and Goya. The discovery of Rembrandt has an influence on his work. He takes an interest in Cézanne and Matisse, who are to play an influential role over the course of his career.

He produces a series of drawings and lithographs that display an evolution towards a more naturalistic and romantic form of expression. His main focus turns to wash drawings.

1956, December, to 1958, December: compulsory two years of military service in Germany. Here he works on the preparation of children’s books, written by his wife-to-be, Monique Pontet, and illustrated by him.

1960: Works as an archivist for the review Connaissance des Arts.

This period marks a drastic change of style for Stockman, where he works on a large number of charcoal drawings, wash drawings, pastels, ink drawings and paintings. Depicting monumental and anonymous figures. His style of social realism is akin to that of Fernand Léger.

There follows the destruction of a great number of canvasses. He then takes a special interest in Ancient Egyptian art, and also in the sculptor Marino Marini. By the end of 1959, his work features very simplified, stylized figures with plain bold colours over large flat surfaces.

A new turning-point leads to the creation of his first abstract paintings.

His enthusiastic discovery of Jackson Pollock throws him into the experience of lyrical abstract painting, featuring dripping, and other techniques designed to scatter and spray colour about the canvas.

Subsequently, as he becomes familiar with the work of Kandinsky and, to some extent, Paul Klee, he adopts a more structured approach to composition.

1960-1972: He directs a large number of courses on graphic expression, within the organization ‘La Vie Nouvelle’, designed to encourage its students to acquire a deeper sensitivity to art. Many loyal attachments to him ensue from these courses.

The lyricism of his former art gives way to a more studied and formal approach.

He abandons abstract painting for a few months to focus on a series of drawings of heads and masks.

1964: Series of abstract drawings made up of very simple geometric shapes, reminiscent of railway signals, with very elaborate use of materials. These various attempts, from 1965 onwards, in the form of masks, collages, and geometrical work, mark a need to move away from the gratuitous nature of abstract work, and to return to the human figure.

1965: New abstract paintings, and a series of collages using paper and textiles, generally painted over.

1967: Meets Maryvonne de Gervais Lafond, who helps him with his engravings, and later becomes his partner in 1974.

The discovery of the ‘primitivism’ of native and tribal African, Australasian, and pre-Columbian American art inspires him to take his distance from the Western individualist approach to portraying people. He then works on monolithic figures, which gradually become more animated over time. Produces numerous engravings on wood and lino. He dedicates this year to the creation of a series of wood engravings, which he sells on a subscription basis. (300 subscribers).

1969: He meets Jean Sabbé, an industrialist and art collector from his hometown of Kortrijk. Sabbé’s empathy for his work gives him the moral support of a loyal friend.

He starts using mainly acrylics to depict animal and human figures. He calls this stage his ‘phantasmagoric’ period.

1973, May: He moves to Couvron (France), where he leads a hermit’s life. He spends long years consumed by doubts. His period of painting imaginary figures had helped him recover a feeling of movement and space, while at the same time instilling fears that his growing technical skills were leading to a sort of facile systematization.

Brutal despair thus leads him to realism, and a period of painting from photographic documents in magazines. Stockman’s first attempts in this direction aim at a relatively free interpretation. Then, for a while, his art is inspired by an American comic strip, but he then feels the need to stick more faithfully to his chosen photographic model. He ends up reducing the photographs to black-and-white slides which he then projects as a basis for his paintings.

Then, for a short period, he paints extremely precise paintings that reproduce every minute detail present in the photograph. These paintings can be likened to those of the American hyperrealist school, though he soon feels the impersonal quality of such work.

Pushing to its extreme the experience of a more projective style of painting, he now aims to rid himself of a modernist aesthetic, despite retaining a certain nostalgia for it. He uses slides designed for psychological tests (T.A.T.-Thematic Apperception Tests, based on drawings of interpersonal situations), magnifying these and colouring them in, with the aim of strengthening their projective quality.

1974: he resumes his research into producing photograph-based paintings, and creates a large series of gouaches, watercolours, acrylics, and oils.

1976, summer: undertakes a series of large canvasses with very shiny boldly coloured lacquer, using dripping methods onto surfaces straight below him. He then abandons lacquer to go back to oils again, but with little confidence or certainty. He paints obsessively and feels the warmth returning to his paintings. Gradually oils take over from any other medium.

1981: He bases his work on some hundred photographs all around a single theme. He also produces oils, engravings, gouaches, and ink drawings, continuing to do so until the onset of his illness. By this time he has created a sort of ‘pictorial opera’, consisting of 84 canvasses, 400 drawings, and around 30 engravings, which he intended to present in its entirety in the form of collection folders. 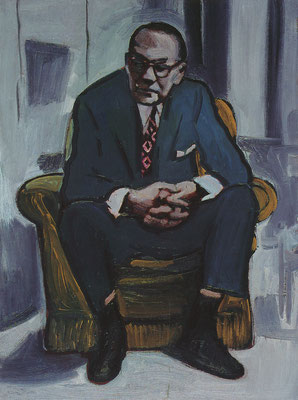 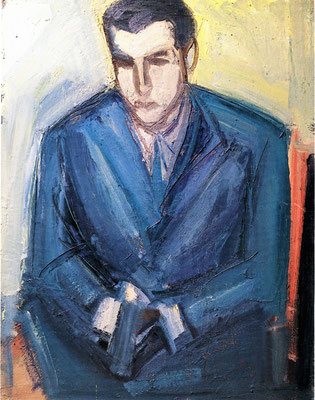 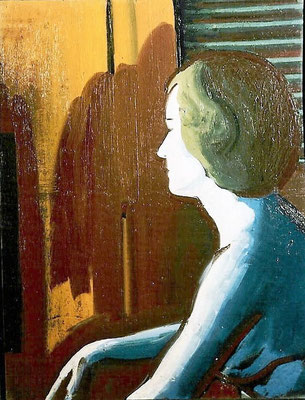 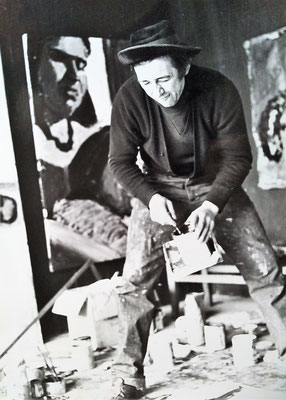 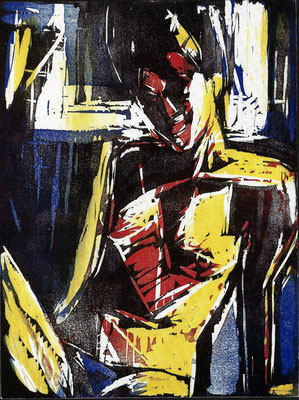 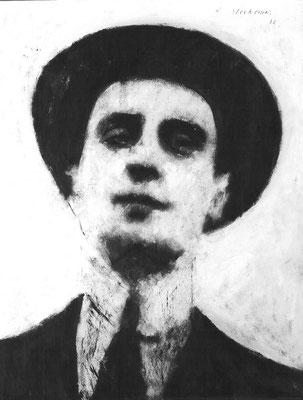